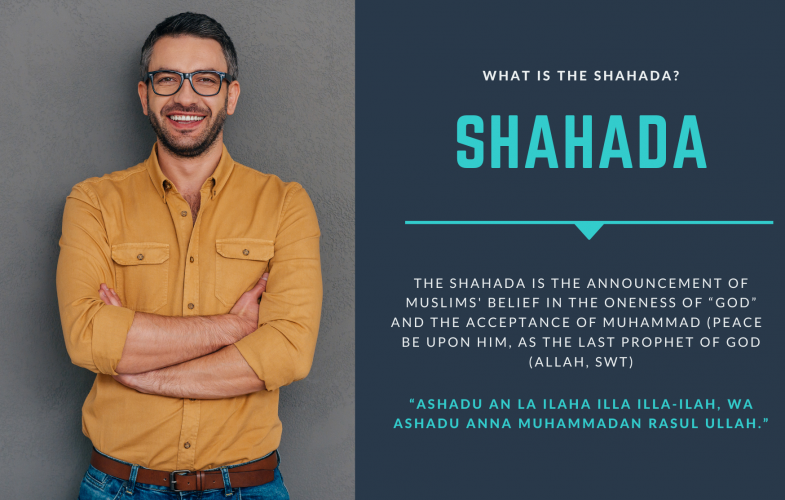 What is the Shahada?
The Shahada (shahadah) is the Arabic term for the declaration of faith in one God (Allah) and His messenger Muhammad (peace be upon him).

Translation: “There is no God but God (Allah (swt) – i.e. there is none worthy of worship but Allah), and Muhammad (peace be upon him) is the Messenger of Allah (swt).”

It is the most sacred statement in Islam, and must be recited with full understanding and mindfulness of it’s meaning.

Why is the Shahada important?
The belief in one Allah (swt) is the central tenet of the Islamic faith, around which all else revolves. Muslims are continuously reminded of this foundational belief, in the recital of the Shahada (shahadah) during each of the five daily prayers, as well as many more pivotal moments of a Muslim’s life.

The second part of the Shahada requires Muslims to acknowledge and testify to the belief in the Prophet Muhammad (peace be upon him) as Allah’s messenger. This serves as a reminder to Muslims of the importance of the Prophet Muhammad (peace be upon him), but also as a reminder to never associate partners with Allah (swt), for He is a messenger of Allah (swt) and seals of all Prophets (last Prophet and there will be no Prophet’s after him, and Allah (swt) remains one God alone.

Facts about the Shahada
The Shahadah is one of the five pillars of Islam. It is a sacred testament given for Muslims to uphold throughout their lifetime and embody in all of their actions and intentions.

The Shahadah is recited in the Athan (call to prayer).
Muslims recite the Shahadah once or twice in their Salah, which they are obliged to do during five different times of the day.

When someone wishes to convert to Islam as their religion, reciting the Shahadah marks their entrance into Islam and their life as a Muslim.

The Shahadah is spoken as the first words a Muslim baby hears upon entering the world, and Muslims strive for the Shahadah to be their last words upon their death.