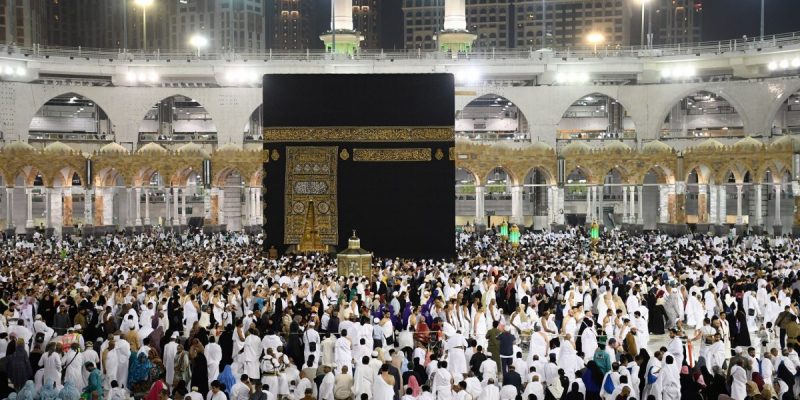 Who should go on the Hajj?

For facts about Hajj, in the UK and around the world, read these FAQs.

The Hajj, sometimes spelt Haj, is the annual pilgrimage to Mecca that Muslims are expected to make at least once in their lifetime. The word Hajj is an Arabic word, meaning ‘to intend a journey.

Hajj is the fifth pillar of Islam – the others are shahadah (declaration of faith); salat (daily prayer); zakat (giving of alms); sawm (fasting in Ramadan).

Who should go on the Hajj?

It is mandatory for Muslim adults to go on Hajj at least once in their lifetime. They must be of sound mind and physically and financially capable of undertaking the journey. Those who complete the pilgrimage can add the title Hajji to their names.

As the Islamic calendar is based on the lunar year, the date changes in the Gregorian calendar each year, and is 10 to 11 days earlier than the preceding year. In 2019, Hajj is expected to be on or around August 9th.

How many people go on Hajj?

Every year about 2 to 3 million people from across the world gather in Mecca for the Hajj. It is the largest single gathering of people on the planet.

How did Hajj start?

The rites performed at Hajj today were established by the Prophet Muhammad (sallallahu alaihi wa sallam) but, based on the Qur’an, they can be traced back to the Prophet Ibrahim, (alaihis salaam), also referred to in English as Abraham.

Muslims believe that Ibrahim (alaihis salaam) was ordered by Allah to leave his wife Hajar and his son Ismail alone in the desert of ancient Mecca. In search of water, Hajar desperately ran seven times between the two hills of Safa and Marwah but found none. Returning in despair to Ismail, she saw the baby scratching the ground with his leg and a water fountain sprang forth at the site.

This is the Well of Zamzam in the Masjid al-Haram in Mecca. Pilgrims visit the well while performing Hajj or the Umrah pilgrimage to drink its water.

What are the rites of Hajj?

The main rituals of the Hajj pilgrimage are:

Ihram: When they arrive in Mecca, pilgrims enter the state of ihram (purity) for the Hajj pilgrimage. Men must wear the ihram garments consisting of two white, seamless sheets wrapped around the body, and sandals. As well as purity, this clothing symbolises equality and unity as there are no visible reminders of class, wealth, status or culture. Requirements for women are less strict and they usually dress in white with only faces and hands uncovered.

While in the state of ihram, pilgrims must – among other things – not cut their nails or hair, not engage in sexual activity, argue or fight.

Tawaf: Each person walks counter-clockwise seven times around the Ka’aba (the cube-shaped building and the direction of prayer for Muslims everywhere) in Masjid Al-Haram. The Ka’aba was built by Ibrahim (alaihis salaam) and is the most sacred site in Islam.

Mount Arafat: Pilgrims go to the plains of Mount Arafat, where the Prophet Muhammad (sallallahu alaihi wa sallam) gave his last sermon, to stand in vigil.

Stoning the Devil: After Arafat, they move to Muzdalfah and then to Mina to perform a symbolic stoning ritual in which they fling pebbles at three walls known as jamarat. This symbolises how the devil tried to mislead Ibrahim (alaihis salaam) from following Allah but was fought off when the prophet threw stones at him on three occasions.

Eid ul Adha: The tenth day of the month of Dhu al-Hijja marks the start of the three-day festival of Eid ul Adha (the Feast of Sacrifice). The pilgrims perform the ritual of animal sacrifice (Qurbani) and continue with other rites to complete their Hajj.

Qurbani: Qurbani, or Udiyah as it known in Arabic, commemorates the sacrifice Ibrahim (alaihis salaam) was willing to perform of his son Ismail (alaihis salaam) for Allah, who spared his son by sending down a ram to take his place.

What is the difference between Hajj and Umrah?

Pilgrims can go to Mecca to perform the rituals at any other time of the year. This pilgrimage is known as Umrah and, unlike Hajj which takes place on fixed Islamic dates, is not obligatory!