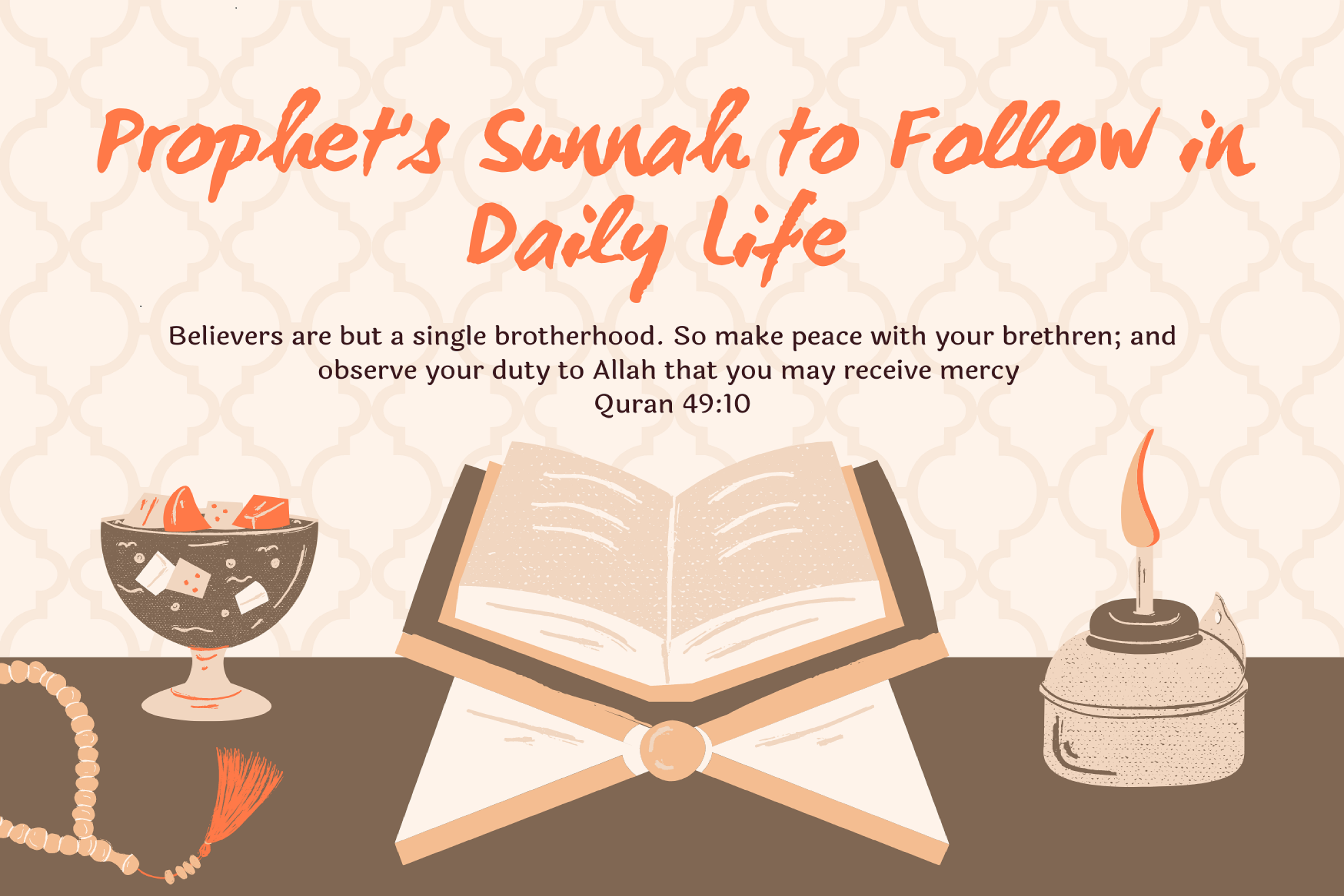 The Sunnah is the Islamic community’s traditional literature of norms and practises. It has become a key source of Shariah law, alongside the Holy Quran and the Hadith of Prophet Muhammad SAW. Sunnah, on the other hand, is a term that refers to the etiquettes or customs that the Prophet SAW followed in his daily life. These sunnah practises are thought to be acts that Muslims should engage in in order to draw closer to Allah SWT.

Every sunnah has a multitude of spiritual and bodily advantages. Here are ten sunnah that you may incorporate into your daily practise!

You acknowledge that your acts are in God’s will when you recite Bismillah. It could also be a conscious reminder that your rizq, like the water you’re drinking, comes from Allah (swt).

2-The Sunnah Way of Awakening
Muslims are urged to sit up and rub both palms on their faces and eyes when they first wake up. This is thought to get rid of any evidence of sleep. After that, you can read the following dua for waking up:

All praise is due to Allah, who has given us life after death (sleep) and to whom we will return. [Bukhari].

Muslims can then use a miswak, a tooth-cleaning twig made from the Salvadora persica tree, to brush their teeth. After that, you can conduct wudhu. “If anyone of you wakes up and does the ablution, he should wash his nose by putting water in it and blowing it out three times, because Satan has stayed in the upper portion of his nose all night,” says the Prophet SAW.

3-Make use of miswak
As previously stated, miswak or siwak is a twig made from the Salvadora persica tree that was used to clean the Prophet SAW’s teeth and that of his companions. The miswak is regarded by Muslims as an ancient toothbrush. Using the miswak, which has antibacterial characteristics, is an excellent way to keep your mouth clean.

Miswak has a lot of sunnah, from applying it as you wake up to using it in between prayers. During Ramadhan, some Muslims employ the miswak in between their Tarawih prayers. Muslims may even recite the Quran while wearing the miswak. This is to demonstrate how important dental hygiene is in Islam.

4-Always begin with the right
Muslims should start with their right side when putting on garments and shoes. Wear any apparel that covers your arm, leg, or foot, starting with the right. Muslims could perform this dua while putting on their clothes:

All praise is due to Allah, who has clothed me in this robe and provided it for me despite my lack of force or might.

As a result, Muslims should start undressing from the left while removing any articles of clothes.

5-When eating and drinking, take a seat.
When eating and drinking, Muslims must take a seat. Muslims will be encouraged to eat more consciously and slowly as a result of these sunnah practises. When Muslims eat mindfully, they avoid being weary as a result of their stomach size. It also lowers the chances of choking and consuming food and beverages at an unhealthy rate.

Muslims are likewise urged to use their right hand to eat and drink. Drinking water with three breathing intervals is preferable to gulping it all at once. Furthermore, Muslims are urged to eat meals as a family. Eating together as a family, according to the Prophet SAW, is an important part of creating connections.

6-When it comes to eating, follow the 1/3 rule.
According to Miqdam bin Madikarib’s account, the Prophet SAW said:

‘There is no worse vessel for a human being to fill than his stomach. A human being only needs to eat a few mouthfuls to maintain his spine straight. But if he has to (fill it), he should put one-third food, one-third drink, and one-third air.’

Food should only occupy one-third of a Muslim’s stomach, leaving the other two-thirds open to water and air. This sunnah is highlighted in order to avoid overeating, which can lead to laziness or undereating. Muslims must approach meals in a balanced manner.

“Purify these bodies, and Allah will purify you; for no slave sleeps in a state of purity unless an Angel spends the night with him, and the (Angel) says, O Allah! every time he turns over. Please forgive your slave; he went to bed in a pure state.” [Tabraani]

Muslims would be in a condition of ablution or wudhu before going to bed and after performing Isha’. You’d be sleeping in a condition of purity, watched over by Angels, while other Islamic scholars argue that being in a state of wudhu would protect sleepers from nightmares. In addition, Muslims who fall asleep while performing ibadah such as zikir will be rewarded abundantly.

Water Alternatives is the source of this image.
‘Whoever retires to bed in a condition of wudu and falls asleep while reciting Allah Ta’ala’s dhikr, his bed will be considered a Masjid. He will be rewarded for remaining in salah and dhikr until he wakes up.’ – [Al-Ijli Imam Abu Murayah]

Being in a state of ablution before sleeping is also seen by Islamic scholars as a preparation for death. On the Day of Qiamat, Muslims will be resurrected in a condition of purity.

8-Sleep in the right side
“Allah’s Messenger SAW used to sleep on his right side when he went to bed.” [Bukhari]

Muslims should position themselves on their right side with their hand under their cheek as they are about to fall asleep. This posture has been scientifically established to be the best sleeping position since it allows us to rest without putting too much strain on our hearts.

9-Speak well or be silent.
“If a believer in Allah and the Hereafter witnesses something, he should either talk about it in good terms or keep quiet.” [Muslim]

We may find ourselves in a situation where we are discussing unimportant matters that do not interest us without realising it. We can converse for hours or even gossip, but neither of these activities adds to our knowledge or benefits us in any way. As a result, the attractiveness of this sunnah is that we would be refocusing our energy and time on pursuits that would provide true value to our lives.

10-Make a happy face
“I have never seen anyone smiling more than Allah’s Messenger (SAW).” [Tirmidhi]

This may appear simple, but smiling is a sunnah that the Prophet SAW practised all of the time. Smiling has been shown to enhance serotonin, a natural antidepressant hormone, in addition to spreading joy. You’ll be channelling optimism and gratitude to God with a grin.

As Muslims, we don’t need to make great gestures to strengthen our faith; instead, it’s the small actions that help us become better servants of God. It may be difficult to instil so many beneficial sunnah at once. However, you can always use visual cues to remind yourself to practise sunnah in your daily life.

Begin typing your search above and press return to search.